WHAT IS AN ANNEXATION?

An annexation is the process of bringing areas of county land into the limits of a city. Cities can only explore an annexation if the target county area falls within what is called their “Sphere of Influence.”

A LAFCO is a regional service planning agency established by the State of California in 1963. LAFCOs exist in all 58 California counties. Their regulatory powers include approving, establishing, expanding, reorganizing, and, in some situations, dissolving cities and special districts in the State.

The LAFCO of San Bernardino is specifically tasked with being the liaison between the City of Chino and San Bernardino County when it comes to exploring and processing any City annexation.

Residents whose properties are annexed will also have locally elected representation through five City Council members instead of one County Supervisor.

The City of Chino is proposing to annex approximately 145 acres of land into its city boundaries that is currently under the jurisdiction of the County of San Bernardino.

Map of the Annexation Area 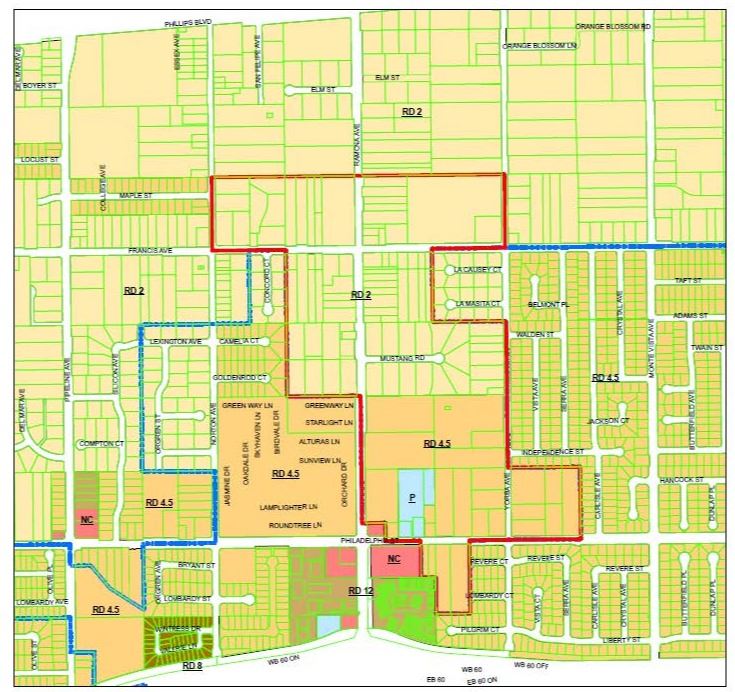 What is the City of Chino looking to Annex?

Located at the northern border of the city and is generally centered on Ramona Avenue and Mustang Road.

The project area consists of mainly residential developments within a suburban area. 73 percent of the project area is surrounded by the City of Chino.

Will there be any future developments once annexation is complete?

There are currently no new development plans, other than those already approved by the County of San Bernardino. Development relating to infrastructure may occur in the future.

Will this affect my property value?

No negative impact to property values is anticipated. Annexation will improve the ability to obtain access to all City of Chino services (police department, Public Works, Parks and Recreation, Building Permits, etc.).

What about sewer service?

As a resident within the proposed annexation area, the County of San Bernardino will be sending you a survey to determine your interest in connecting to potential sewer services.

Will my property taxes increase?

Does the City of Chino have future annexation plans?

Yes, there are other areas within the City of Chino’s Sphere of Influence that are targets for annexation.

Will rules change in the annexed area?

Currently legal uses in San Bernardino County will remain legal in the City of Chino.

The annexation area already has General Plan designations in place because the area falls within the City of Chino's Sphere of Influence. There are no land-use changes proposed at this time and the City of Chino is using a process of maintaining existing designations which is called, "prezoning."

Any animals currently permitted under County of San Bernardino zoning at the time of annexation will also be permitted by the City of Chino, with the understanding that animal keeping on the properties will transition to meeting future City of Chino standards.

Sign up to be contacted by email of any future community meeting and all public hearings. These meetings will provide an opportunity to directly address any questions, comments, or concerns.

Will land-use designations change for the annexed area?

No, the annexation area already has General Plan designations in place because the area falls within the City of Chino’s Sphere of Influence. There are no land-use changes proposed at this time and the City of Chino is using a process of maintaining existing designations which is called, “prezoning.”

How do I stay informed?

All property owners, residents, and tenants within the annexation area will be notified by mail of any future community meeting and all public hearings.

Property owners and voters who support the City of Chino’s annexation effort are not required to take any action.

For property owners and/or registered voters within the annexation area who may oppose, you have the right to “protest” this annexation. This protest method is determined by LAFCO of San Bernardino County and must conform to specific requirements as to form, wording, procedure for submission, and timeframe.