Create an Account - Increase your productivity, customize your experience, and engage in information you care about.

The College Park Specific Plan is located within and adjacent to the northeastern boundary of the City of Chino, encompassing 710 acres. The project area is currently owned by the State of California, set aside for the California Institution for Men (CIM). In 2003, the State of California Department of General Services (DGS) identified the 710-acre vacant portion of the CIM facility surplus property. As such, DGS proposes to convey, sell, or otherwise transfer the surplus property from state ownership to the three parties: City of Chino, Chaffey Community College District, and a private developer. The City and its Community Development Department, Chaffey Community College District, and the DGS signed a Memorandum of Understanding to carry forth the planning, entitlement, and ultimately the development of the surplus property. This draft Specific Plan was prepared based on the project description provided within the Memorandum of Understanding. The City of Chino has also prepared a Master Environmental Impact Report for the 710-acre site.

Of the 710-acre project approximately 140 acres has been identified for the City of Chino for the expansion of Ayala Park, while approximately 100 acres are set aside for Chaffey College campus. In early 2003, the State of California General Services (GS) commenced the private developer selection process for the purchase of the remaining 470-acre portion of the surplus land and development of a neo-traditional master planned community. SunCal Companies was selected as the developer for the 470-acre parcel and the master developer for the preparation of a comprehensive Specific Plan to provide direction and continuity within the 710-acre project site. SunCal Companies is working in conjunction with the City of Chino and Chaffey Community College District to provide an integrated mixed-use master planned community. This Specific Plan and other regulations, as adopted by the City, would control the land use development of the surplus property.

The development of the College Park community started out conceptually as a vision, based upon traditional neighborhood design guiding principles. In order to implement the vision, community building blocks were developed, influenced by community design fundamentals and goals and policies provided by stakeholders (City of Chino, State of California, Chaffey College and SunCal Companies). Finally, detailed implementation elements were developed to ensure that the Vision could be realized. 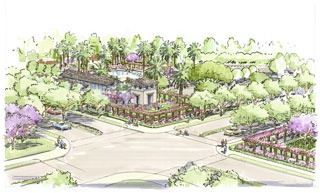